Greece on the Brink

It increasingly looks like the already grossly underfunded Greek cultural establishment will suffer yet more from the effects of any default to Greece's creditors.  Any financial meltdown will also once again undercut the assumption of UNESCO and its supporters in the archaeological lobby that nation states are always the best stewards of antiquities.  Going forward, a new paradigm needs serious consideration.  Greece will not only need to reform its economy, but limit its ownership and control only to artifacts of real cultural significance. The rest are frankly probably better off in private hands, and indeed, state encouragement for a legal trade in such artifacts will not only help grow the Greek economy, but foster cultural exchange that can benefit Greece as well.
Posted by Cultural Property Observer at 8:25 AM 1 comment:

It's good to see that one archaeo-blogger, who previously criticized the ACCG's efforts to seek information about import restrictions from the State Department, has now embraced the process himself as important to the public's right to know.  Will wonders never cease.
Posted by Cultural Property Observer at 8:20 AM 17 comments:

Preservation Not Repatriation Should be the Goal

The Committee on Cultural Policy has published my commentary on repatriation and the Syrian Civil War.   Unfortunately, HR 1493, as currently drafted does not change the Convention on Cultural Property Implementation Act's 19 USC Section 2609's requirement that material be repatriated back to Assad.   And, let's not forget "public diplomacy" will apparently trump an artifact's safety every time.   Indeed, even after unanimous votes in the House and Senate, the Iraqi Jewish archive-- which includes documents stolen from Jews fleeing repression-- may still be returned to Iraq sometime in the not so distant future.  Hopefully, the US Senate will address this problem as it considers HR 1493.
Posted by Cultural Property Observer at 7:12 AM No comments:

UNESCO's Chief has rightly condemned the Assad regime's barrel bombing of the Maarrat al Numman Mosaic Museum.  Yet, in the Anti-American reaches of the archaeological blogosphere, it's just a case of "stuff happens" in war and yet another opportunity to take swipes at the antiquities trade.

"Stuff" indeed "happens" in war, but in this particular case it's hard to stomach the claim that the bombing was done by "mistake" given the publicity efforts to protect the museum's mosaics from war damage have received in the international press.   Indeed, if anything, it's more likely Assad's forces attacked the museum BECAUSE a consortium of U.S. Institutions were involved in supporting the effort to shore up the museum's mosaics.  One can only hope those efforts succeeded, at least to some extent.

It remains to be seen how more responsible archaeological blogs respond to this latest tragedy.

Update (6/23)-  It seems none of the other well known archaeological blogs thinks this story is worth comment on.  It's unclear why, but it does again suggest that there is a conscious effort to deemphasize any destruction and looting done on behalf of the Assad regime and instead focus entirely on ISIS.
Posted by Cultural Property Observer at 8:43 AM No comments:

The Assad Regime has attacked  the Ma'arra Mosaic Museum in Syria with barrel bombs.   It is unclear whether sandbags put in place to protect its valuable mosaics helped save them from destruction.  What should be clear, however, is that the repatriationist assumptions behind HR 1493 need a major rethink.  Dictators who purposefully target museums are most certainly not the best stewards of cultural hertiage, and so repatriation cannot be equated with preservation, which should always be the primary goal.

Posted by Cultural Property Observer at 11:30 AM 5 comments:

This news should be of concern to everyone.   Due to budget pressures in the UK, the Portable Antiquities Scheme will be folded into another department at the British Museum and likely suffer budget cuts despite its popularity with both the public and many British archaeologists.   As a result, Roger Bland, who has run the PAS since its inception, will be leaving his post.

The PAS has been instrumental in bringing archaeologists, metal detectorists and collectors together in a shared effort to help record the past.  So, perhaps it's not surprising that the BM states that the PAS is being placed in the Department of Learning, Volunteers and Audiences as part of an effort to help the BM with public outreach to help make it the "museum of the country" by working with partners outside of London. If so, CPO hopes that the BM will ensure this important asset remains adequately funded despite obvious budget pressures.

For more, see here.
Posted by Cultural Property Observer at 6:58 AM 4 comments:

This week's front page Washington Post article that again features the discredited claim that looted antiquities are the "second most important commercial activity [for ISIS] after oil sales" [along with a misstatement of the impact of the "1970 Rule"] raises important questions:

(1) Is the article meant to prompt action on the improved, but still flawed HR 1493 in the Senate?

(2) Is ASOR's $600,000 State Department funded  "monitoring and global awareness campaign"  really a backdoor means to lobby on that bill, which uses the ongoing tragedy in Iraq and Syria as a justification for a new State Department bureaucracy aimed at fostering further "coordination" with the same insiders associated with the archaeological lobby who already dominate things?
Posted by Cultural Property Observer at 11:04 AM 1 comment:

The Art Newspaper reports on pressure to open up the Medici archives to the public to assist collectors and dealers in their due diligence efforts.  The archives have already been disclosed selectively, so its unclear why the archaeological blogoshere is so opposed to their release.  In any event, shouldn't those who claim to act in the public interest and often demand transparency of others, promote rather than oppose transparency here?
Posted by Cultural Property Observer at 9:20 AM 9 comments:

Tariq Aziz, Saddam Hussein's point man in efforts to end international sanctions put in place in response to Iraq's unsuccessful invasion of Kuwait, has died in prison.   As Larry Rothfield notes, archaeological groups actively worked with Aziz in an effort to undermine those sanctions by travelling to Iraq in hopes of getting back to the business of digging.  Yet, unfortunately the relationship between archaeology and dictatorship has yet to be studied in any great depth.  This is a pity.  In CPO's view, the "state owns everything old " approach promoted by Middle Eastern dictatorships inexorably leads to a "trash the past" mentality by those who then associate antiquities with hated dictatorial regimes.
Posted by Cultural Property Observer at 1:45 PM 16 comments:

ISIS HAD A BOOK WITH PICTURES OF COINS IN IT!

Yesterday, the archaeological blogosphere and twitterdom whipped itself up into a minor frenzy over of an image of a page from a book that Kurdish fighters evidently seized from ISIS that included a picture of some ancient coins.

The implication of course is that this image is somehow hard "proof" that ISIS is funding itself with conflict antiquities, specifically ancient coins.  Indeed, we are informed, "[The book]  might help us to identify which ancient coins the Islamic State is handling (or expecting to handle). Thereby, it might help us to trace how the Islamic State is funding itself through the trafficking of conflict antiquities."

Of course, it does not seem much to matter that the coins depicted appear to be either Phoenician ones struck in Lebanon and coastal areas in Syria (outside of ISIS' control) or perhaps Egyptian copies of Athenian Tetradrachms.  As it is further explained, "obviously they were used and may have been deposited elsewhere". (Prof. Elkins take note.)

In any event, with all the millions ISIS is supposedly making from "conflict antiquities" one would think they could at least buy a decent price guide.
Posted by Cultural Property Observer at 7:42 AM 6 comments:

Legal Trade to Continue under HR 1493?

The House of Representatives has passed HR 1493 with some modifications that don't go anywhere near far enough to address the concerns raised about the legislation by the Committee for Cultural Policy and other groups.

The new bureaucracy created in the State Department will lack transparency.   Any "coordination" efforts will again ignore the concerns of collectors and the small businesses of the numismatic and antiquities trade.  Instead, the same insiders associated with the archaeological lobby who already dominate things will again be given free reign to help call the shots.

As for the "emergency" Syrian restrictions that are authorized in the legislation, the new "sunset" provision appears to be little more than an invitation for emergency restrictions to be a bridge to permanent ones.  The much needed provision for temporary imports of at risk Syrian cultural artifacts requires so many bureaucratic findings that it will likely never be used to save much from destruction at the hands of ISIS or Assad for that matter.  Indeed, nothing in this legislation precludes the State Department and US Customs from ultimately repatriating artifacts to the same odious Assad regime that has already engaged in looting in places like Apamea and Palmyra and which has bombed important cultural sites into dust.  That. of course, may be just fine with at least some in the archaeological lobby which generally has been unwilling to criticize the Assad regime despite its looting and destruction of Syrian cultural property.

On the bright side, before the bill was voted on in the House, Representatives Chabot and Engel both emphasized that the legislation was not meant to target the lawful trade in Syrian artifacts and only authorizes import restrictions on artifacts illegally removed from Syria after the start of its civil war.

However, assuming HR 1493 becomes law, it remains to be seen whether the State Department and Customs and Border Protection will follow this bipartisan Congressional direction or revert back to their standard operating procedure: Create as broad a designated list of items with a "country of origin" (manufacture) of Syria as is possible and then assume that anything of a similar "type" is illicit unless proven otherwise.   Of course, this kind of "guilty" until "proven innocent" mentality may be contrary to the plain meaning of the Cultural Property Implementation Act, 19 USC Sections 2601, 2604 and 2610 as well as our great Anglo-American legal traditions, but it is quite in keeping with the "ends justifies the means" attitude of the State Department's Cultural Heritage Center, CBP and the "archaeological lobby," all of which already "coordinate" quite well with or without this legislation.

Posted by Cultural Property Observer at 8:57 AM No comments:

A Mystery to Unravel 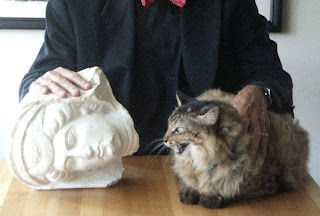 A follower of this blog has sent this photo.  He/she have asked me to help identify the cat.  The head, of course, which is said to have appeared in the US, is rubbish, probably a modern copy of an Egyptian pharaoh.  Any thoughts?

Posted by Cultural Property Observer at 6:58 AM No comments: