Nathan Elkins, writing on the AIA's blog, gives his views about what happened at the CPAC meeting concerning proposed renewals of the Bolivian and Greek MOUs.

Of course, CPO remembers it all a bit differently.

More importantly, CPO feels he has been misquoted concerning what he said about current import restrictions being improperly based on where a coin is "made" vs. "found." Elkins is flat out wrong. CPO certainly did not "admit[] this was only his interpretation of the CPIA as other attorneys, academics, and the federal courts have not agreed with Tompa’s understanding of the ‘found in’ vs. ‘made in’ argument."

Perhaps Elkins can be more specific about his contention. Certainly both Urice and Adler have agreed with CPO in their Rutgers Law Review Article. Moreover, then State Department Deputy Legal Adviser Mark Feldman also seemed to agree that the focus must be where an object is found in his statements made at the time the CPIA was being discussed.

Finally, Elkins--who is no lawyer-- appears to have a fundamental misunderstanding of what a U.S. District Court and the Fourth Circuit have actually said about the matter.  Both have agreed that import restrictions only apply to objects of archaeological interest "first discovered within" and "subject to export control" of a specific UNESCO State Party.  Yet, they have refused to conduct a judicial review of the designated lists because they consider the issue to be a "political question" that makes the issue "non-justiciable."  So, no Court has actually looked at the issue on the merits.
Posted by Cultural Property Observer at 3:17 PM No comments: 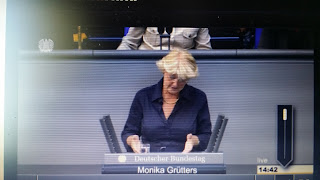 Papers Not in Order

The Israeli Antiquities Authority raided a store selling ancient artifacts and coins and has charged the owner with violating Israel's new registration laws.  It is unclear from the story whether there is any actual evidence the store was selling recently looted material.

CPO is concerned that hard to comply with registration schemes will lead to more seizures of artifacts without proof they were actually looted.

Moreover, if dealers are to register there wares so should archaeologists.  Requiring archaeologists to maintain registries will help protect against pilfering of archaeological stores and provide at least some information short of publication on what is being found.
Posted by Cultural Property Observer at 6:13 AM 1 comment:

Of course, this new information comes too late to impact the debate on HR 1493, which has already passed Congress.
Posted by Cultural Property Observer at 1:55 PM No comments: