Petrie Rolling Over in his Grave?

Flinders Petrie was one of those great archaeologist-collectors of the 19th-20th centuries. His massive collection was sold to help form the basis of the Petrie Museum at the University College London.

So, CPO wonders how the great one would feel about his namesake museum not only taking the AIA's St. Louis chapter to task for deaccessioning some Egyptian artifacts, but actually suggesting that the sale of well-provenance material in their possession encourages criminal activity.
Posted by Cultural Property Observer at 10:31 AM No comments: 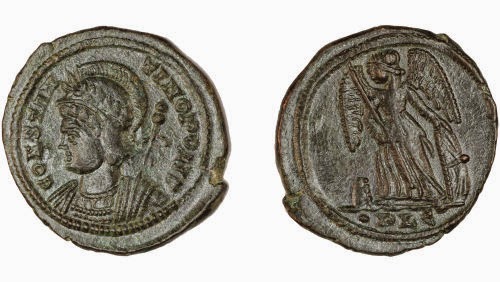 "find is a Roman coin in a  hoard of 22,000 others dating to around AD341 found in Seaton, Devon. The copper alloy coin, called a nummus, was struck in AD 332 at the mint of Lyon (Gaul). It shows the personification of Constantinopolis on the obverse and a Victory on prow on the reverse. This very common type was struck by Constantine the Great across the Empire to celebrate the inauguration of the new city of Constantinople which was to become the capital of the Eastern Empire."

Congratulations again to Roger Bland and the Portable Antiquities Scheme for this achievement.
Posted by Cultural Property Observer at 7:40 AM 1 comment:

It should be no surprise there are no similar achievements in countries like Bulgaria, Cyprus, Egypt, Greece and Italy.  Confiscatory laws and fiats against collecting, the stuff of dictators, don't work.  Fair play-- which ensures the State pays fair market value for what finds it wants to keep-- does.  The PAS recognizes metal detectorists, collectors, and other interested members of the public as legitimate stake holders, and they have responded enthusiastically.  The proof is not only in the numbers, but in what all those finds reported by the public have told us about English and Welsh history.

CPO congratulates the PAS and Roger Bland for this important milestone.
Posted by Cultural Property Observer at 7:51 AM 1 comment:

The Association of Dealers & Collectors of Ancient and Ethnographic Art have issued due diligence guidelines for its members, primarily dealers and collectors of high-end material.

The guidelines set forth some things to consider, taking into account value of the object, how common it is, and its potential origin.
Posted by Cultural Property Observer at 8:13 AM No comments:

Remember those high minded claims that Italy would voluntarily share its cultural wealth with American museum-goers in return for a MOU that would drastically limit the ability of American citizens to legally import art sourced to that country?

According to a promo,


Priceless antiquities. Ruthless grave robbers. High-tech counterfeits. International smuggling routes that run from the necropolises of Tarquinia, Italy to the posh auction houses of London, England, from the seedy underbelly of the black market to world-renown museums.
Ripped from the case files of the Guardia di Finanza, stories like these will be told during “Treasures and Tales of Italy’s Guardia di Finanza Art Recovery Team,” a groundbreaking exhibition of priceless works of Etruscan and Greco-Roman art and craftsmanship, on display at The Grand Opera House in Wilmington, Delaware from Oct. 3-Dec. 21.

Each ancient ceramic, mosaic and statue tells a story, not just of the time of its creation, but also of its theft and recovery by the indefatigable agents of the Gruppo Tutela Patrimonio Archeologico, the art recovery team inside the Guardia di Finanza.
These artifacts may be "priceless," but they may nonetheless be seen for $15, the cost of admission.

Posted by Cultural Property Observer at 12:16 PM No comments:

As the Archaeological Blogosphere Celebrates the Latest Repatriation, Serious Questions Are Being Raised About Government Tactics

As the archaeological blogosphere is celebrating the latest repatriation to Italy, the Los Angeles Times has raised serious questions about the government's hardball tactics used to crack down on collecting Native American artifacts from federal land.

Moreover, John Yoder and Brad Cates, two former chiefs of the Department of Justice's Asset Forfeiture office, have concluded the whole civil asset forfeiture program is so prone to abuse that it should be scrapped.

Civil asset forfeiture and money-laundering laws are gross perversions of the status of government amid a free citizenry. The individual is the font of sovereignty in our constitutional republic, and it is unacceptable that a citizen should have to “prove” anything to the government. If the government has probable cause of a violation of law, then let a warrant be issued. And if the government has proof beyond a reasonable doubt of guilt, let that guilt be proclaimed by 12 peers.

While Yoder and Cates do not address civil and criminal forfeitures relating to so-called "cultural property," CPO submits the opportunities for abuse arising from the application of confiscatory foreign patrimony laws as the basis for a National Stolen Property Act violation, may, if anything, be considerably worse.

It's long past time for far greater public scrutiny of government action in this area.  But, who in the media will dig beyond the easy "morality tale" derived from a government press release for the real story?
Posted by Cultural Property Observer at 2:26 PM No comments:

Commerce Not Such a Bad Thing?

CPO remembers that not so long ago AIA members regularly denounced "commercial interests" at every CPAC meeting.  So, its refreshing to see that the AIA now accepts advertising on its website and that the Saint Louis Chapter is even auctioning off some Egyptian artifacts long in its possession.

Perhaps commercial interests are not so bad after all.
Posted by Cultural Property Observer at 3:57 AM 3 comments:

The Washington Post is reporting on a new Bible Museum is coming to Washington, DC.   It will no doubt be a hit with evangelicals, but a lightning rod for unbelievers and those with an axe to grind against collecting and more understandable concerns about the destruction of mummy masks to harvest papyri.  One thing is for sure:  The Greens have generously funded academic research, a good thing by most accounts.
Posted by Cultural Property Observer at 3:39 PM No comments:

Given Italy's efforts to enlist the press and archaeological community to shame museums and collectors into repatriating artifacts long out of that country, one would think Italy would be at the forefront of returning art wrongfully taken from its own Jewish citizens during the Fascist era.  Not so according to a new report.  So, does the Republic of Italy at its allies in the archaeological lobby instead think restitution should be a one-way street?
Posted by Cultural Property Observer at 11:08 AM No comments:

Kate Fitz Gibbon, a former Cultural Property Advisory Committee member, has this to say about recent efforts to link ISIL/ISIS terrorism to Western collectors as the basis to support yet another embargo on the import of artifacts from present-day Syria.

Meanwhile, CBS News has outlined major ISIL/ISIS funding sources as "hot oil," extortion and donations from wealthy Gulf Arabs.   Alleged antiquity sales to Western collectors are not mentioned at all.

Posted by Cultural Property Observer at 8:36 AM No comments:

Zahi Hawass' blog discusses the importance of the Step Pyramid and his heroic efforts to help save it from collapse with the help of an "all Egyptian team."  Now that it appears the job has been horribly botched, will he accept some responsibility?

Meanwhile, Egyptian authorities claim there is no problem at all and the archaeological lobby remains silent about this unfolding debacle.  No wonder.  This latest mess again calls into question their premise that the Egyptian military dictatorship is such a fine steward of all things Egyptian that undocumented artifacts should be repatriated to its tender loving care.
Posted by Cultural Property Observer at 4:06 AM 2 comments:

The archaeological blogosphere goes into high gear anytime any artifact is seized from a hapless peasant in Egypt, so one would think there might be at least some mention of a horribly botched restoration of one of Egypt's earliest pyramids.

Instead of silence, archaeologists should be asking how this could have happened, and whether the restoration company was selected based on merit or their political connections and/or their willingness to pay bribes.

The fact archaeologists have consistently failed to do so with regard to this and other examples of poor stewardship again raises an important question:  Is the Egyptian state and its supporters in the archaeological lobby really interested in conservation or control?
Posted by Cultural Property Observer at 11:06 AM 1 comment:

As the nature and extent of reported looting by or under the protection ISIS/ISIL terrorists in Syria is debated in the press and in the archaeological blogosphere, no one seems to have suggested an obvious solution to any problem:  Turkey should close its border with Syria.

Turkey's Islamist government is already facing criticism for allowing jihadists free passage to and from Syria from Turkish soil.  Turkey, a member of NATO, has a very large and well trained army.  That force should be deployed to the border to both cut off the flow of jihadists to the war zone and confiscate any artifacts illicitly removed from Syria.

CPO submits this is a far more fair and effective solution to any looting problem than giving license to US Customs and Border Protection to seize any undocumented artifact just because it was made in Syria millenia ago.  More so because any funding ISIS/ISIL may receive from "hot antiquities" must pale in comparison to the $800 million the group evidently received from our supposed Turkish allies in return for shipments of "hot oil."
Posted by Cultural Property Observer at 10:18 AM 2 comments: